When young people speak, we should listen

It’s Youth Week and this year’s theme is “E korero ana mātou. E whakarongo ana koutou? | We’re speaking. Are you listening?”. Adults have a long history of dismissing young people’s opinions and participation because of that old chestnut: “lack of life experience”. You’d think the mountains of historical record attesting to adults stuffing up would have put an end to that notion. But evidenced by the masses of emails Chloe Swarbrick (or any outspoken young person in politics/business/life) receives on a daily basis telling her to “grow up” it seems that kind of self-awareness amongst the older generations is sadly amiss.

We do our world a massive disservice when we don’t pay attention to and include youth voices.

Here’s how us adults can do more listening, less talking:

No design without co-design

If you or your organisation is doing anything - yes, anything - at all involving young people then they need to be at the table. But you can’t just buy pizza and throw together a focus group. Consultation isn’t co-design. It’s just one part of it. True co-design engages young people from understanding the need through to the solution and everything in between. 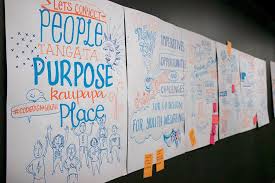 Having young people involved in co-design helps to ensure that their needs and values are genuinely being addressed. It also creates opportunities for you or your organisation to have a better understanding of the issues faced by young people, and to use those insights to explore new possibilities for solutions.

So 18 is the magical age when the maturity you require to vote is bestowed upon you?? When we have 70-year-olds extolling the virus-killing benefits of drinking bleach and 14-year-old girls making the world come together to fight climate change you can be excused for questioning that reasoning. 16 and 17-year-olds can work full-time (= pay taxes), drive a car, own guns, move out of home, consent to sex, and a bunch of other mundane adult-y things.

Luckily for us, a new campaign “Make it 16” was launched in September last year. They have the full support from Aotearoa’s favourite great-uncle, Children’s Commissioner, Andrew Beecroft. He told Stuff “lowering the voting age would enhance turnout, ingrain the habit of voting and uphold young people’s rights”

He also stressed that lowering the voting age needs to go hand in hand with better civics education. Good civics education helps young people feel empowered and connected to their communities and they are more likely to stay engaged with the political process into the future.

Here's where you get the telling off you've been waiting for. When the School Strikes 4 Climate rolled out across Aotearoa last year young people’s strong and passionate voices were matched in passion by the old fogey brigade telling them to not wag school and that “if climate change were as bigger deal as you’re going on about, us adults would’ve sorted it”. We tell young people what to do, what to say and what to believe. Then we ignore, fear and disrespect them when they tell us that they have been listening and paying attention, and think some changes are needed.

Where is the respect for the amazingly articulate and highly engaged youth that society always says it wants? If we are educating our youth to be critically thinking citizens, the least we can do is listen to them when they are courageous enough to speak up.

There are some amazing groups out there, led by young people. I don’t know about you but learning about them gets me hyped on the future. The kids are alright:

Generation Zero: a movement of young New Zealanders working together for meaningful action on climate change through smarter transport, liveable cities, & independence from fossil fuels. Instrumental in getting the Zero Carbon Bill into law.

Consent Club: confronting “consent culture” at parties and festivals. They provide training for volunteers on how to perform bystander intervention with an aim to make partying safer.

4Tk (4 Tha Culture): When the first School Strike 4 Climate was organised to occur on the first day of Polyfest in March last year, 4TK was formed to bring necessary representation from Pacific people and South Auckland. As people from Pacific nations will be disproportionately affected by climate change, they bring a vital cultural lens to the issue of climate change and centre indigenous values.

Rainbow YOUTH: they provide support, information and advocacy for queer, gender diverse and intersex youth, their friends, whānau, and communities.

Te Ara Whatu: born from meeting at the 23rd Session of the UN Climate Talks. Indigenous youth from the Pacific and Aotearoa working for climate action and indigenous sovereignty.

Just Speak: aims to encourage discussion by young people about the justice system. It runs campaigns, publishes reports and makes submissions, focusing on the high Māori imprisonment rate and the growing prison population.

How to be the best version of yourself!